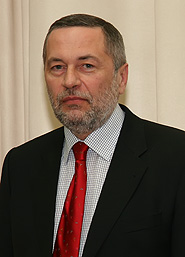 Aleksandr Vladimirovich Vorobey
head of the Department, Doctor of Medical Sciences, professor,  corresponding member of the National Academy of Sciences of the Republic of Belarus

Staff of the course of topographic anatomy

Staff of the course of pathology 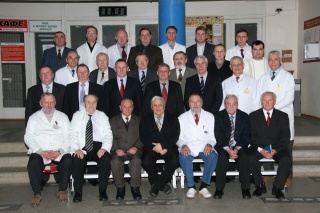 Department of Surgery of the Belarusian State Institute of Advanced Medical Training was the first department in the system of advanced medical training.

That is why heads of clinics of Medical Institute were predecessors of heads of Surgery Department (M.P.Sokolovsky, S.M.Rubashov, E.V.Kortchits etc.).

After an official opening of the Belarusian State Institute of Advanced Medical Training S.M.Rubashov (1883—1957) became the first head of the Department. His disciples were the following colleagues: V.V.Babuk, I.M.Stelmashonok.

E.V.Kortchits (1880-1950) was the second head of the department (1934 – 1941), native of Tashkent, was the first and the only one corresponding member of the Academy of Sciences of the Belarusian Soviet Socialist Republic, a famous surgeon, an originator of oncology and antithyroid services. At that time he had 2 assistants: A.A.Greiman and N.I.Bobrik.

During the Great Patriotic War advanced training courses were held in the framework of Minsk Medical University, which moved his base to Yaroslavl.

In 1949 P.N. Maslov became head of the Department of Surgery of the Belarusian State Institute of Advanced Medical Training, who in a few days continued his career at Minsk Medical University.

From 1949 to 1953 professor V.O. Morzon became head of the department - an original Belarusian surgeon, who at first worked as an ordinary surgeon in a rural area and then became a professor. Occupying the post of rector of the Belarusian State Institute of Advanced Medical Training, he enormously improved conditions for surgery courses in quite difficult conditions on the base of railway hospital. After his death the Department moved into a new-built site of Minsk Regional Clinical Hospital on Podlesnaya Street.

From 1954 to 1963 A.M. Boldin became head of the Department. The main areas of the clinic's activities remained abdominal surgery, some new fields of chest surgery, anesthesiology started their functioning.

From 1963 to 1965 an Associate Professor Z.E. Livshits  carried out head's duties. After his retirement N.P.Batian was chosen as an assistant of the department.

Since 1971 the Department of Surgery was based on a newly opened Republican and then Minsk Regional Clinical Hospital.

Annually, more than 6000 of surgery interventions are hold not only on abdominal cavity organs, but also on endocrine system. More than 1520 joint replantations have been done, vessel transpositions have been worked out and implemented for the first time in the world, a programme on result improvement at diabetic foot treatment has been worked out.

From 1993 to 1997 a net of the Republican (2) and Regional (5)Rehabilitation rooms of stoma care had been created, in 2005 more than 5000 disabled with entero- and colostomies were registered there. 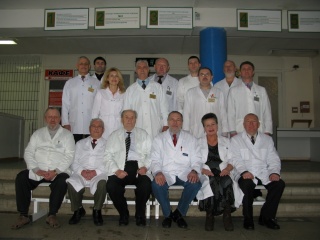 Since 2002 professor A.V.Vorobey , Doctor of Medical Sciences, has been head of the Department.

From the middle of the year 2006 the following members of the staff have been employed, who have defended of still prepare their Candidate's theses at the Department of Surgery: M.T.Voevoda  (2006),

V.N.Lurie (2008), A.Tch.Shuleiko (2010), assistants: Y.N. Orlovsky (2011), G.A.Popel  (2012), A.M.Makhmudov  (2012). In 2010  G.P.Kuzurov, an Associate Professor, retired because of his disability. In 2010 professor V.N.Podgaisky  started to work on a part-time basis at the Department of Emergency Surgery of BelMAPO, from 2014 he headed a newly opened Department of Plastic Surgery and Combustiology. V.V.Klimovitch, an associate professor (2009) and professor N.N.  Tchur left the Department and started to work in another place. In 2007 professor Y.P.Ostrovsky  became head of a newly created Department of Cardiosurgery with a course of transplantology. Since 2010 professor  V.T.Kohniuk, vice-principal of the Republican Scientific and Practical Center "Oncology"  and medical radiology named after N.N.Aleksandrov , has been working at the Department of Surgery.

A.V.Vorobey  continued strengthening credibility and developing department's traditions. From 2002 staff of the Department has published 19 monographs and workbooks in different surgery fields, 29 invention patents  have been got, 18 Candidate's theses have been protected under supervision of staff of the department, two series of monographs have been created: "Colorectal surgery" and "Surgical Gastroenterology".

National universal medical laser «МУЛ-1» started to be widely implemented into surgery of biliary system, lien, thyroid, phebology and angiology. The laser has been successfully developed and tested under supervision of professor I.N. Grishin Over the last years 26 clinical residents have undergone intramural training at the department and 56 ones - intra-extramural training and training under the contract. Today 12 of them are working at Minsk Regional Clinical Hospital and clinics of the city of Minsk. Annually, more than half of emergency calls of regional air medical service in surgery are made by the staff of the department.

The modification of operations of Sugiur at hemorrhage from gullet varicosity has been implemented, new approaches have been considered, more than 25 esophagocoloplasty operations on gullet corrosive strictures caused by burns have been carried out. The following developments have been made: pathogenetic mechanisms of chronic inveterate at dolichocolon and left sided tumorous colonic obstruction, stomach-ache of psychogenic nature at chronic pancreatitis; new X-ray methods in the treatment of surgical patients have been offered (colonic obstruction, stoma patients, dolichocolon, intestinal transit). The following issues are of special interest and are being studied: angioembolization in the system of celiac axis, surgery of arteria carotis and vertebral artery, laser phlebocoagulation; surgery of lower thoracic and abdominal segments of gullet, perforated ulcer, treatment of neck phlegmon and mediastinitis.

By the end of 2014 under the supervision of professor  A.V.Vorobey 14 Candidate's theses have been defended: in the field of coloproctology (6), emergency surgery (3), thoracic surgery (1), biliary surgery (1), surgical hematology (1), endoscopy (1), colorectal cancer (1). In 2011 professor A.V.Vorobey  organized and headed Belarusian Pancreatic Society, which in 2013 joined and became a part of European Pancreatic Society as a national one. On the 13th of November, 2014, professor A.V.Vorobey was chosen as a corresponding member of the National Academy of Sciences of Belarus. In 2014 Y.N.Orlovsky, an assistant of the department was awarded a Prize named after academician V.F.Kuprevitch given by the National Academy of Sciences of the Republic of Belarus in the nomination "young scientist" for a circle of works. The course of topographic anatomy and operative surgery was created in 1947. The first head of this course was Z.Sh.Begman, an Associate Professor, Candidate of Medical Sciences, a participant of Finnish Military Campaign and Great Patriotic War, a campanion of Red Star.

In 1969 under the supervision of S.V.Leonov, an Associate Professor, Candidate of Medical Sciences, the course was reorganized in the Department of Topographic Anatomy and Operative Surgery. S.V. Leonov is the author of more than 40 scientific works on abdominal cavity blood supply and central nervous system, he was awarded by the badge "Excellent Worker of Public Health". 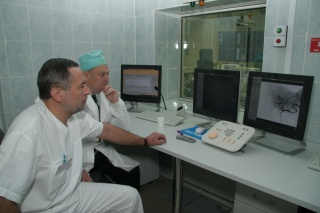 From 1978 to 1988 professor L.E.Kotovich was head of the department, he is an author of 2 monographs and more than 120 scientific works in the field of pediatric surgery.

After professor L.E.Kotovich was chosen as a head of the department, in 1988 professor K.N.Tarun, Doctor of Medical Sciences, an author of more than 60 research works on surgery of gastro-intestinal tract, became head of the Department of Topographic Anatomy and Operative Surgery. The final step of his activities was reorganization of the department into the course on the basis of the Department of Clinical and Experimental Surgery (head - professor I.N.Grishin) in 1987.

From 1987 to 2014 professor A.F.Ryliuk, Doctor of Medical Sciences, became head of the course. He was an author of 3 monographs, 4 inventions, 80 innovation proposals, and more than 200 published works in the field of operative gynecology and surgery. His innovative ideas are widely used in many CIS countries.

The staff of the course of topographic anatomy and operative surgery was represented by the following ones: A.K.Kholodny, an Associate Professor, senior teacher N.N.Makovsky and G.S.Grinevich, a laboratory assistant.

The course is hold in Lesnoy village, on the basis of the Central Scientific and Research Laboratory of BelMAPO. There is an anatomic museum, a wonderful collection of visual aids. During their practical classes trainees, postgraduate students and clinical residents master their skills in operation room at the Central Scientific and Research Laboratory and Mortuary of Minsk Regional Bureau of Forensic Examination

From 2006 to 2014 there were some changes at the department. In 2006 the department had got a new title - Department of Surgery. In February, 2010, due to the liquidation of the Department of Pathology and Topographic Anatomy new courses appeared at the Department of Surgery: the course on anatomic pathology (head - Y.I.Rogov, an Associate Professor) and the course on topographic anatomy (head - professor A.F.Ryliuk, Doctor of Medical Sciences). In April, 2010, by the Order of the Ministry of Health of the Republic of Belarus, the Republican Center of Reconstructive Surgical Gastroenterology, Coloproctology and Laser Surgery was founded on the clinical base of the Department of Surgery (head - head of the department, professor A.V.Vorobey), which had been renamed into the Republican Center of Reconstructive Surgical Gastroenterology and Coloproctology since 2014.

Scientific areas at the department

In 2012 the following two researches were improved:

In 2013 the research work "Role of Kahal interstitial cells in the selection of large bowel extent of resection at surgery treatment of Hirschsprung disease in adults" had been finished, and in 2014 the research work "Study of homeostasis system and anoptosis of hepatocytes while applying different modes of surgery laser exposure on liver" had also been finished. Since the 1st of January, 2015, A.M.Makhmudov, an assistant of the department, has got the Grant from the European Association of Coloproctologists for 3months training at Leicester Hospital (Great Britain).

The staff of the department underwent training at clinics of Austria, Germany, Poland, Baltic countries.

From 1986-2014 the staff of the department organized 11 master classes on different fields of abdominal surgery and phlebology, including 3 international ones; 14 republican conferences with international participation, including Plenum associations of surgeon hepatologists from Russia and CIS countries (April, 2011), conference "Actual problems of surgical pancreatology" (November, 2011), 1st republican school of pancreatology (December, 2012).

Annually, since 2010, in Lithuania, Latvia and Belarus, there have been five Baltobelarusian conferences on colorectal surgery.

The Department concluded contracts on cooperation with the Baltic Society of Phlebologists and with the Surgery Clinic of Heidelberg University.

Since 2004 there have been 5 international clinical trials of medicines (at Crohn's disease, ulcerative colitis; lupus, pulmonary hypertension, critical ischemia of lower limbs).

In 2014 trials of a new drug at ulcerative colitis have been started.

On the 25th of March, 2015, an assistant of the Department of Surgery of BelMAPO, Ezhy Ionas Vizhinis, defended Candidate's thesis on the topic "Method selection in surgical treatment of deep neck phlegmons and perforations of gullet, complicated mediastinitis".

Head of the Department of Surgery, professor, corresponding member of the National Academy of Sciences of the Republic of Belarus, A.V.Vorobey and an Associate Professor, A.Tch.Shuleiko, took part and made their speech in surgical treatment of chronic pancreatitis at the 23rd Congress of Surgeons of the Ukraine, which took place on the 21st - 23rd October in Kiev. 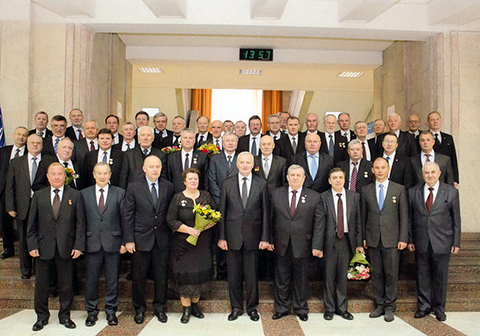 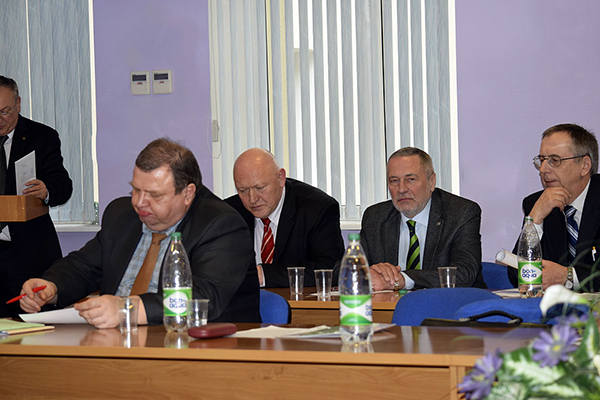 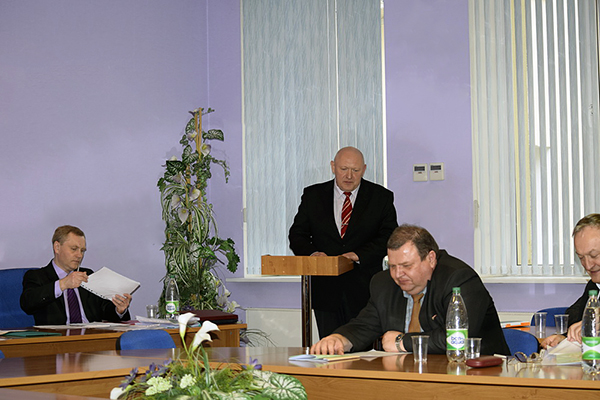 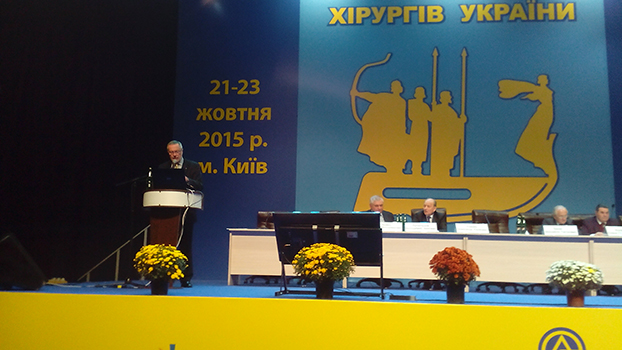 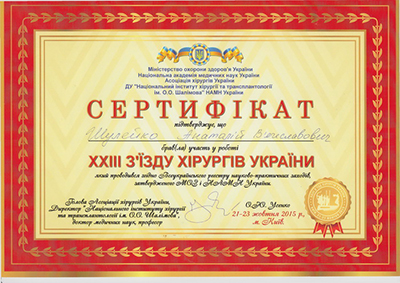