Department of Neonatology and Medical Genetics 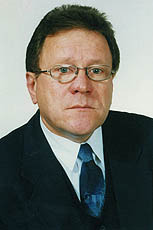 Staff of the department: 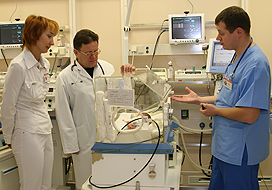 The course of medical genetics and prenatal diagnostics has been organized at the Department of Neonatology of BelMAPE since February, 2000, aiming at training of physicians of medicogenetic services and physicians of different specialties modern  methods of clinical and  laboratory diagnostics, methods of treatment, rehabilitation and prevention of genetic and congenital diseases. In 2000-2003 head of the course was an academician of the National Academy of Sciences of the Republic of Belarus and Russian Academy of Medical Sciences, Doctor of Medical Sciences, professor, G.I. Laziuk (main geneticist of the Ministry of Health at that time). 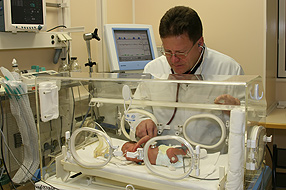 Training is held at divisions of the Republican Scientific and Practical Center «Mother and Child», leading institution of the Republic of Belarus in the field of medical genetics. The training is carried out at outpatient and polyclinic divisions, laboratories (biochemical genetics, clinical cytogenetics, molecular diagnostics), clinical divisions, ultrasound rooms and rooms of invasive prenatal diagnostics. Specialists of the department constantly cooperate in scientific field with leading geneticists of European universities: issues of ultrasound diagnostics of cardiovascular system congenital abnormalities; morphological diagnostics of congenital malformations of fetus – control over justification for surgical termination of pregnancy regarding medical evidence.

Scientific work of the department 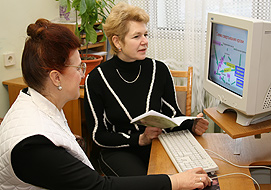 Specialists of the department develop ways of problems solving, which are actual for healthcare of Belarus, devoted to clinical-metabolic and endocrinology aspects of adaptation abnormalities and their correction in premature inborns at hypoxic states at early neonatal period; optimization of intensive therapy methods from a position of risk reduction of early pediatric invalidization, multidisciplinary approach to the problems of newborns from a position of search oxidative stress interrelation, systemic inflammation and clinical peculiarities of neonatal period. Results of scientific researches are reflected in scientific publications, instructions of the Ministry of Health. During the time of the department’s existence specialists of the department have published more than 250 scientific works at reviewed scientific medical magazines of Belarus, CIS countries and non-CIS countries, more than 50 methodological recommendations and guidance manuals have been prepared. The department prepared and successfully protected 14 Candidate’s and one Doctoral theses.

Academic and medical work of the department 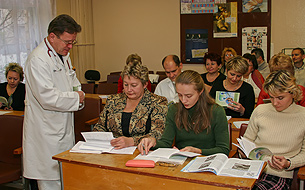 Clinical bases of the department are Republican Scientific and Practical Center “Mother and Child” and Healthcare Establishment “Clinical Maternity Hospital of Minsk Region”. To provide continuing postgraduate advanced training for physicians the Department of Neonatology and Medical Genetics holds advanced training courses; prepares specialists at clinical residency on the specialties «Neonatology» and «Medical Genetics». Multimedia technologies and topic discussions are widely used during the training. Practical classes include clinical rounds, analysis of patients’ histories, analysis of morbidity and assistance to physicians while implementing new methods and technologies of diagnostics and treatment.

Specialists of the department are successfully carrying out both academic and scientific work, constantly go to other regions of Belarus by orders of the Ministry of Health and other governing boards to render medical care and consult the most complicated patients through the Republican Center of Emergency Medical Care. Also specialists of the department participate at regional and republican seminars with clinical rounds, analysis of patients’ histories, analysis of morbidity,   practical assistance in implementation of new diagnostic and treatment methods.

The department is actively carrying out scientific work on the problems which are actual for healthcare of the Republic of Belarus: issues connected with clinical, metabolic and endocrinologic aspects of adaptation disturbances and their correction of premature infants at hypoxic states at early neonatal period; issues of early neonatal mortality and measures of its reduction in Belarus; adaptation of newborns being born from multiple pregnancy; influence of perinatal factors on early invalidization of low birth-weight babies and its prevention.

Additional possibilities of the department 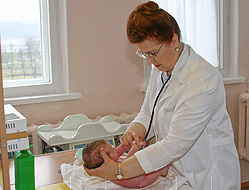