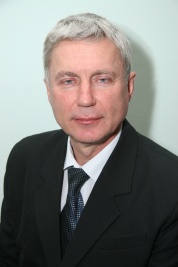 Main directions of the department's activities:

Since 2013 the department has been working on the research work "Modern standards of living and health protection": to develop evidence-based principles of nutrition optimization for elderly people on the basis of nutritional status of this population category and its interrelation with blood system diseases.

During the work of the Department 3571 different medical specialists from our Republic and abroad underwent training courses.

Clinical base of the department is State Establishment "Clinical Hospital of Invalids of Great Patriotic War named after P. Masherov". Academic work of the department is carried out at therapy and neurology divisions of the hospital; patient population and modern medical technologies used at hospital help to successfully prepare physicians in geriatrics.

The department has 4 highly-qualified teachers with a good work experience in science and teaching: 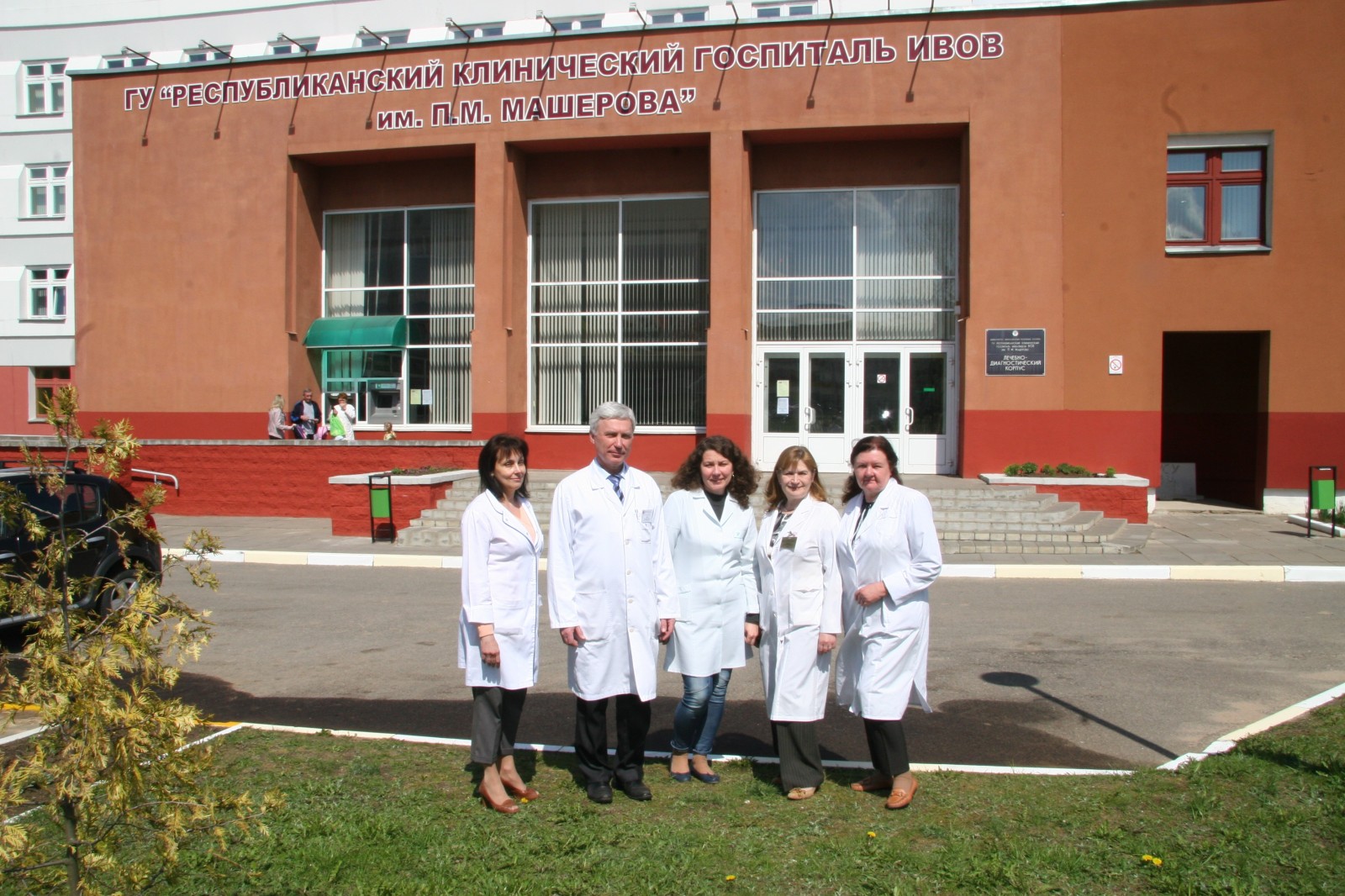 For the last 5 years all the teaching staff of the department underwent courses of advanced training, organized by BelMAPE, and participated in different international congresses and conferences.

Annually about 300 physicians of different specialties undergo training at the department.

Advanced training courses are given on various issues (issues of diagnostics, treatment and prevention of different diseases of elderly people).

For the period of 2006-2015 75 reports at Republican scientific and practical conferences were made, 2 reports - abroad.

The Department of Gerontology and Geriatrics together with the Training Management Division of State Establishment "Republican Clinical Hospital of Invalids of Great Patriotic War named after P. Masherov” is the base of Republican Gerontology Center (research guidance center on the issues of medical services rendered to veterans and elderly people). All specialists of the department take an active part in preparation of organizational and methodological materials on the work of Republican Gerontology Center and geriatric services of the Ministry of Health of the Republic of Belarus, also consult patients.

Staff of the department takes an active part in promotion of healthy lifestyle for elderly people in Belarus: the specialists give lectures in classrooms and outside (Public University of Health Promotion and Creativity of Veterans - school of the Third Age, participation in shows on Belarusian TV and radio, publications in printed media. 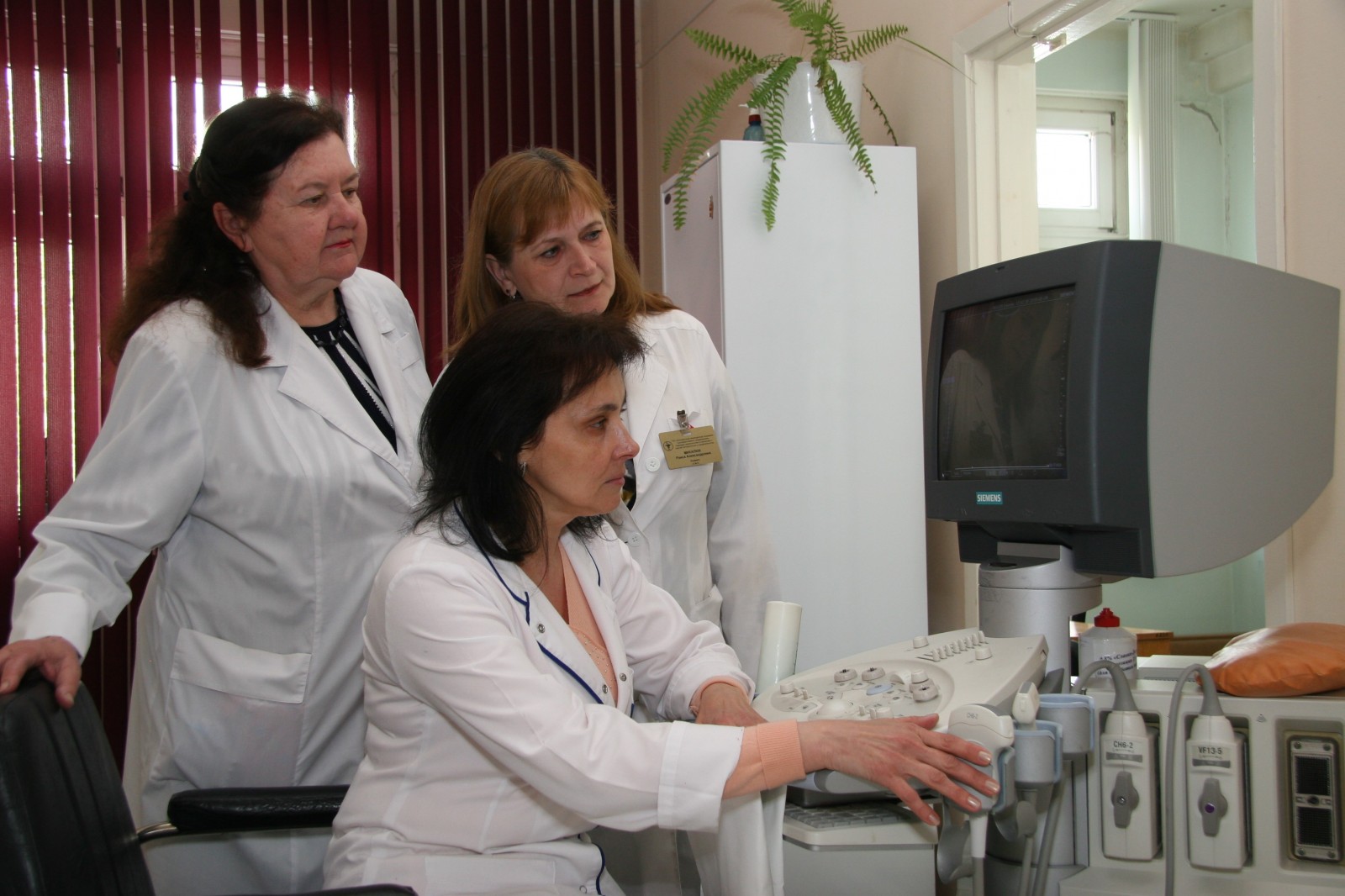 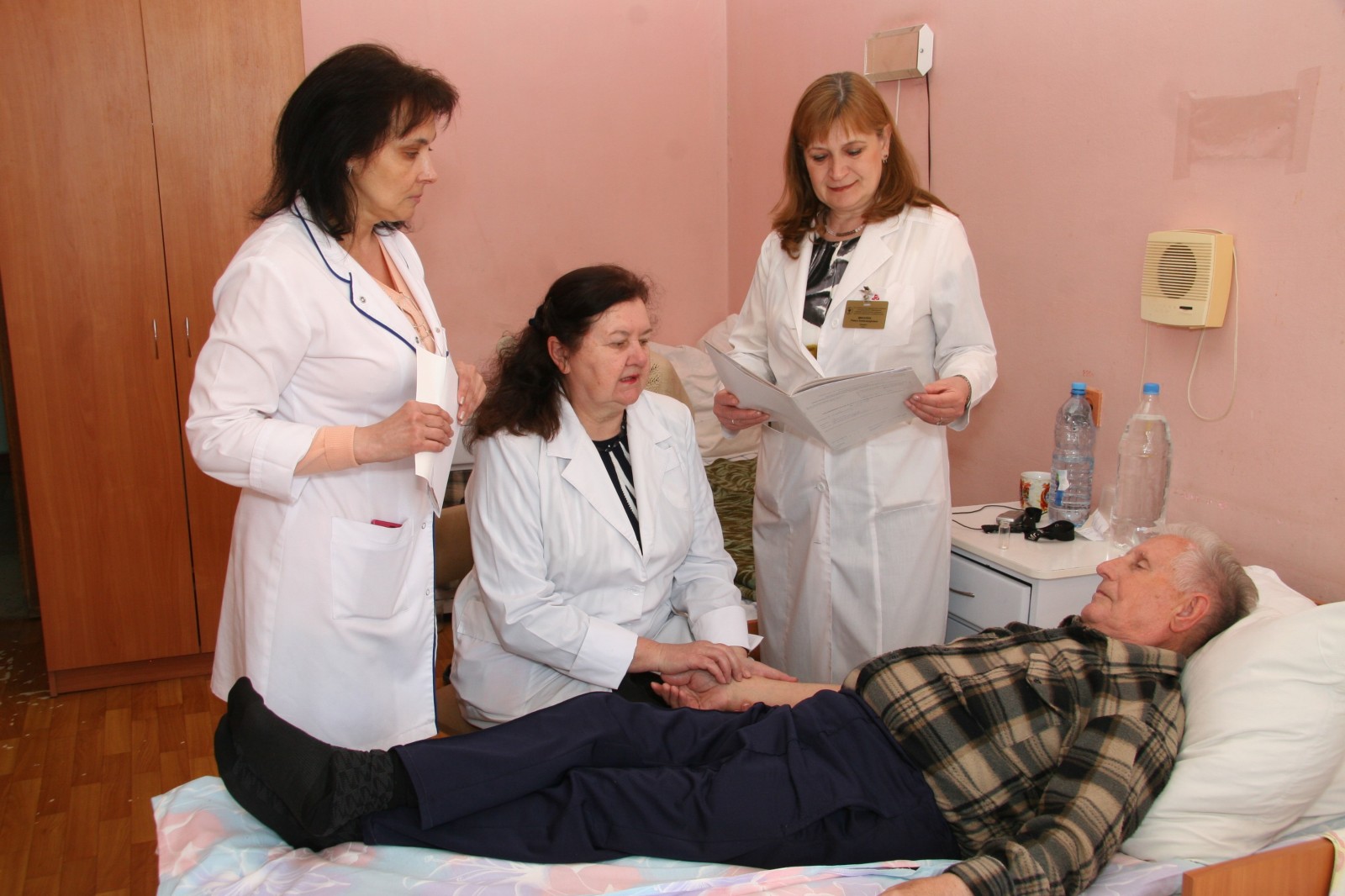 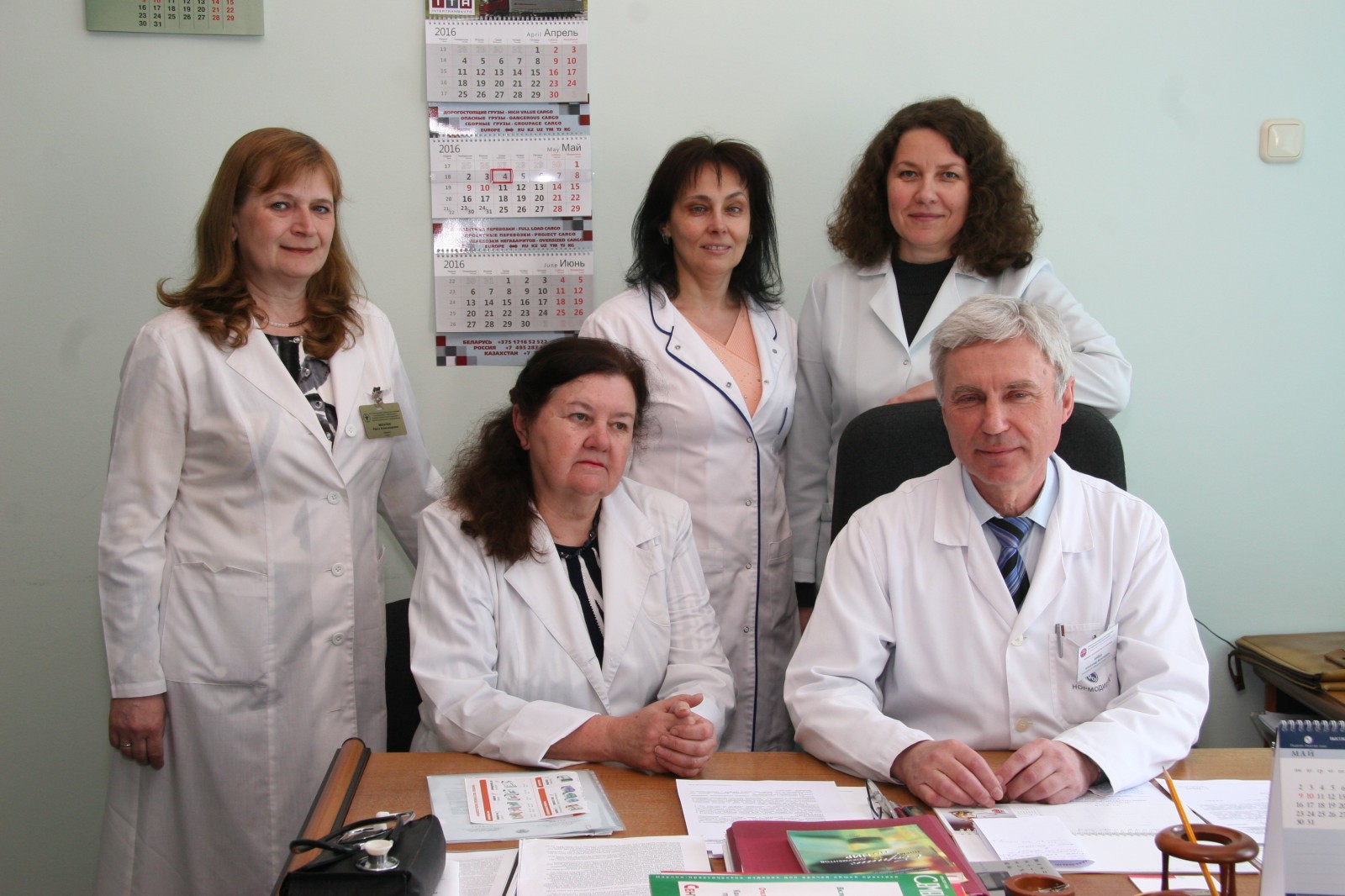 Ageing of population is one of the important issues of our century.

In the Republic of Belarus, as if it is in the World, there is a process of population greying. At present in Belarus there are about 2 million people who are above 60 years old.

Elderly people have a greater need, in comparison with other demographic groups, in medical and social care. In this respect, there should be taken additional measures in further improvement of medical care rendered to people of elderly and senility age.

Our country carries out a certain work in this field, as is evidenced by the development history of geriatric services.

Geriatric services of the Republic were founded in 1979. The first part-time geriatrician of the Ministry of Health of Belarusian SSR was G.A.Vechersky, Associate Professor of the Department of Cardiology and Functional Diagnostics of Belarusian State Institute of Medical Advanced Training.

In November, 1991, Ministry of Health of the Belarusian SSR made an Order №196 "About improvement of geriatric services and organization of nursing care hospitals or medical and social beds in clinical and preventive establishments of the Republic". This document has become a basic one for further development of geriatric services. In accordance with this Order all regions and the city of Minsk had main part-time geriatricians.

Geriatric services started to develop more actively after the Council of Ministers of the Republic of Belarus in 1993 had approved the Republican Complex Program on Problems of Elderly People. Certain measures in organization of geriatric care were taken. Every Regional Clinical Territorial Medical Association had its own geriatrician. On the base of Scientific and Research Expertise Institute of work capacity and work organization of invalids there had been created a laboratory on the problems of elderly people, Republican gerontology center, which was headed by professor I.S.Gulko.

In 1996 Belarusian State Institute of Advanced Medical Training had a new department - Department of Geriatrics and Gerontology, - for training and retraining of specialists in geriatrics.

In 1997 head of this department, professor V.P.Syty, was appointed to the post of part-time head geriatrician of the Ministry of Health. He developed and implemented forms of records in geriatrics, worked out development concept of geriatric services. It was his initiative to create Belarusian social association of geriatricians and gerontologists.

Within the period of the department's existence (until 2003) more than 1000 geriatricians had undergone training there, 250 scientific works and monographs have been published.

In April, 2001, Republican Complex Program of Problems of Elderly People for the period 2001-2015 has come into force and was approved by Commission Regulation of the Republic of Belarus.

In accordance with the program, for better hospital care rendered to elderly people, additional medical-social beds have been given. There are 4 hospitals for Invalids of the Great Patriotic Work in Belarus with high-quality hospital medical care. Besides, multi-specialty hospitals have rooms of enhanced comfort for war veterans, where annually 45 thousands of patients are treated.

For more effective medical services rendered to patients of elderly and senile age there are special geriatric rooms which are considered to be centers of healthy way of life promotion, centers of personal health improvement groups, centers of consultations of elderly patients with geriatricians.

Since April, 2004, professor A.V.Hapaliuk, head of the Department of Clinical Pharmacology and Therapy, was appointed to the post of the main part-time geriatrician of the Ministry of Health of the Republic of Belarus.

In September, 2006, the Department of Gerontology and Geriatrics had been created again with a head V.E. Sushinsky, Candidate of Medical Sciences, who was appointed to the post of the main geriatrician of the Ministry of Health of the Republic of Belarus. Since 2001 A.V.Baida, Associate Professor, Candidate of Medical Sciences, has been working as a head of the department.

There is the Republican Center of Gerontology in Belarus, which is evolved in research and methodological activities for rendering medical care to veterans and elderly people.

In some regions and in Minsk there are regional geriatric services.

Management and methodological work of these centers is carried out be head part-time geriatricians. There are about 180 geriatric rooms in the Republic. All organizations of healthcare have schools of the "Third age".

Course of allergology and occupational pathology

The Department of Occupational Pathology was established in 1961 on the base of the 2nd Clinical Hospital, where 15 beds were located in the Therapy Division. The first years of the department’s work were connected with the names of associate professor G. Zakharov, who chaired the course of occupational pathology at Belarusian State Institute of Advanced Medical Training, assistants V. Romanov and N. Skepyan, occupational pathologist L. Kantorovich. In 1963 the 5th Clinical Hospital became a clinical base of the occupational pathology course, where the Occupational Pathology Clinic was opened with outpatient  and hospital divisions for 45 beds, close to clinical and diagnostic services (toxicology, functional diagnostics). 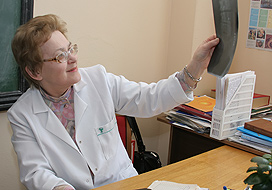 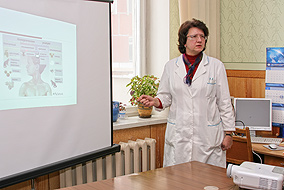 Specialists of the department are curators of allergology services and occupational pathology services, who carry out constant management, academic and clinical activities. The specialists prepared a number of regulatory acts, - Orders, methodological and tutorial letters for the Ministry of Health of the Republic of Belarus on allergology and occupational pathology, speleotherapy.

Main forms of classes - lectures, seminars, participation in scientific and clinical conferences. During practical classes patients are demonstrated to the trainees, there are clinical discussions.

Listeners participate in medical and expert commission meetings, get acquainted with modern diagnostic methods at centralized toxic-immunologic laboratory of 10th City Clinical Hospital and on other bases of BelMAPE.

For the whole period of department's existence 3 Doctoral and 6 Candidate's Theses have been written.

At present the department does main researches on the following directions:

In 2006 in accordance with the Commission Regulation of the 16th of August, 2005 №905 "Republican special-purpose programme on improvement of conditions and protection of labour for the years 2006-2010" staff of the department started to rewrite the Order of the Ministry of Health of the Republic of Belarus of 08/08/2000 №33 "About medical examinations of patients with professional diseases".