Department of Gastroenterology and Nutritiology 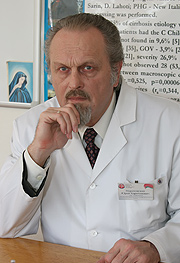 For the last 5 years all teachers of the department have undergone advanced training courses at BelMAPE and international courses and conferences. 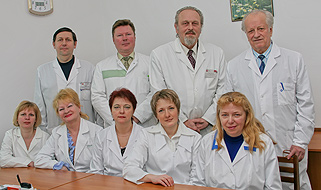 Practically, in the Republic of Belarus there has been created a unique educational unit which is considered to be a leading one in the training on gastroenterology and nutrition. Main fields of scientific activities of the department are the following ones: study of mechanisms of formation, development and progressing of chronic diseases of digestive system with the focus on clinical and             pathophysiological peculiarities, which help to provide the development of standardized approaches in the strategy of medical care aimed at the development of its quality.

From 1980 to 2000 the department had been headed by professor I.N. Bronovets.  The main issue of his scientific activities was determination of peculiarities of functional condition of cardiovascular system in patients suffered from chronic diseases of biliary tracts and liver.

Since 2000 the department has been managed by Y.H. Marahovsky, Doctor of Medical Sciences. His Doctoral thesis revealed the issue of identification of regularities of gallstone formation and formations of chronic cholecystitis which helped to formulate vesicular-lypoperoxide hypothesis of gallstone formation and offer optimized variants of early diagnostics of this disease. Y.H.Marakhovsky published more than 250 works, among them there are 6 monographs, 35 articles republican editions, 28 in international editions. 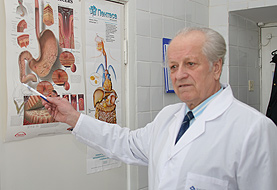 From the time of its foundation and until 1999 staff of the department was represented by the following specialists: M.N.Sakovich, Associate Professor, assistants V.N.Khomich, G.A.Karaseva, D.N.Ulasevich, senior laboratory assistants A.V.Yaroshevich and V.V.Ermak.

Since 2000 two assistants, - Y.S.Kravchenko and Y.V.Gorgun, started to work at the department Topic of their theses were the following ones: « Clinicodiagnostic aspects of Zhylber syndrome» and «Computer – tomography characteristics and insuliproducing function of pancreatic gland».

The department has its own devices for computer intragastric pH measurement, which helps to evaluate genetic polymorphism of metabolism of proton pump inhibitors.

A significant component in improvement of educational process is the information support of the department trough data base on gastrointestinal pathology, computer programs “TELEGASTRO”, “GIVEN”, “DATAGATE”, works of 17 European gastroenterology weeks, 10th, 11th and 12th World Gastroenterology Congresses, video materials on gastrointestinal endoscopy with the durations of 27 hours, constant access to Internet since 1999.

Scientific issues of greater interest until 1998 were the following ones: clinical biochemical evaluation of chronic cholecystitis and clinical peculiarities of hypolactasia in Belarus, evaluation of the effectiveness of calorie restriction diet therapy at gastroenterological pathology.

Since 1999 main scientific fields of the department were the following ones:

In 1999 the department finished creation of national antiacid drug GEFAL, industrial production of which was started in 2000 by JSC «Belmedpreparaty», the drug has a Certificate of Registration in the Russian Federation. In 2010 the drug occupied about 85% of the Republican market among drugs of this group.

In 2010 a drug, solution for infusions, Gepavil, was registered.

Pathophysiological and clinical basics of standardization and optimization of gastroenterology diseases.

On the basis of existing internationally-accented standards of medical specialized gastroenterology care there have been worked out standardized technologies of evaluation of severity of bowels inflammatory diseases, optimized for practical healthcare of the Republic of Belarus, of malabsorption syndrome, liver cirrhosis, functional dyspepsia, gastroesophageal reflux disease, which are being implemented into practical work of basic establishments of the department.

Scientific performance in preparing of scientific staff at the department has the following dynamics: in 1980-1990 the department prepared 2 scientific Candidate’s theses, in 1991-1999– additionally two scientific works under supervision of professor I.N.Bronovets.

Academic standing of the department can also be explained by the participation of professor I.N.Bronovets in editorial board of the journal «Healthcare of Belarus» and Y.H. Marakhovsky in editorial boards of the following journals: «Medicine», «Actual issues of Gastroenterology» (edition of CIS-countries),  «Russian Journal on Gastroenterology, Coloproctology and Hepathology»,  «World J Gastoenterology” (World journal on gastroenterology). Y.H. Marakhovsky is a member of scientific committee of the World Gastroenterology Association, until 2009 he was a member of the expert board of the Highest Attestation Committee of Belarus and Chairperson of the Expert Board in Clinical Medicine. 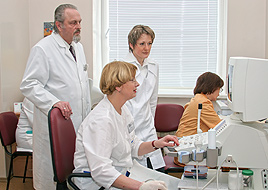 In accordance with the approved programs target groups of the trainees are the following ones: general practitioners, general practice doctors, gastroenterologists, infectionists, recreation therapists. Group formation is carried out upon requests of healthcare establishments.  The department can’t influence on group membership.

Results of the department’s work in figures: consultations - 13095, 2124 of the consultations were made at Minsk Regional Clinical Hospital, 183 – in other healthcare establishments; diagnostic researches - 6071 cases; 44 emergency and 14 planned call-outs, 124 talks at seminars, conferences for practical healthcare, 23 methods have been implemented into the practice of healthcare.

With the assistance of the department, in 2014 Ministry of Healthcare created the Republican Center of Gastroenterology.

The Republican Center of Gastroenterology carries out the following:

Role of the department:

The department carries out a huge amount of organizational and methodological and consulting work.

Staff of the department are experts/members of the following commissions of the Ministry of Health of the Republic of Belarus:

The department actively carries out work on promotion of healthy way of life: lectures -44, interviews - 56, answers for questions - 72, seminars -11, discussions – 12.

Staff of the department successfully carries out a number of tasks of scientific works, financed from the budget. 9 tasks have been completed.

Since 2014 the department successfully carries out the scientific work «Development of variants of rational pharmacotherapy of the main social and demographically important diseases of digestive organs in adults» (State registration: № 20130896 of 11.06.2013), the financing of which is carried out on budget basis.

The results of the researches are implemented into practice. Thus, two drugs, worked out by the department are successfully produced and disposed, - Gepavil and Gepavilag. The developed drugs (Gepavil and Gepavilag) are actively used in the Republic.