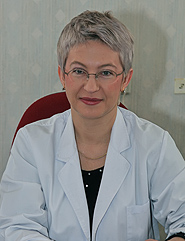 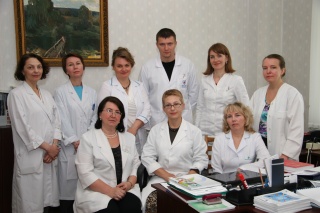 Postgraduate training of endocrinologists at Belarusian State Institute of Advanced Medical Training had been started from 1958, when there had been created a course in endocrinology at the department of therapy. In 1960 it was transformed into the Department of Endocrinology with the base of the 1st Clinical Hospital. First head of the department was a prominent scientist of the Soviet Union, professor N.M.Draznin.

From 1973 to 1985 the department was headed by N.S.Gapanovich, an Associate professor, one of the pioneers of surgery endocrinology in the Republic of Belarus. At this period the most complicated therapeutic and surgical endocrine pathology was concentrated at Minsk Clinical Hospital №2. 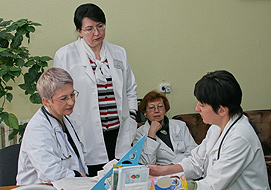 Since 1998 the department has been headed by Doctor of Medical Sciences, professor L.I. Danilova, who from 1985 to 1992 had been assistant of the Department of Endocrinology of Belarusian State Institute of Advanced Medical Training. From 1992 to 1998 she headed the Laboratory of Endocrinology at Scientific and Practical Center of Radiation Medicine. Professor L.I.Danilova is a chairperson of the Belarusian Association of Endocrinologists, member of the European Association of Endocrinologists and European Association of Diabetes, International Federation of Diabetes, European Thyroid Association. Since 2000 professor L.I.Danilova is a chairperson of a specialized Board of Academics of BelMAPE on the defense of Doctoral and Candidate’s theses in endocrinology and laboratory diagnostics. Professor L.I.Danilova has published more than 300 scientific works, including 6 monographs, she was awarded by a Honorary Certificate on Science and Technologies of the Soviet of Ministers of the Republic of Belarus for the best scientific project. She was also awarded by the Honorary Certificate of the Higher Attestation Commission of Belarus, medal of Francis Skoryna. L.I.Danilova is an Excellent Worker of Public Health of Belarus. She prepared 13 Candidates of Medical Sciences, also she is a scientific advisor of two Doctoral Theses. Prominent specialists, professionals, who worked at the department at different periods: Associate Professors G.T. Gelman, V.I. Bakhanovich, L.V.Laptenok, G.V. Kozyuk, V.I.Shutova. Joint consultation call-outs and screenings with Republican             Antigoiter Dispensary (head doctor L.P.Fedorova) were carried out. At different periods academic and scientific cooperation were carried out by scientific schools of professors I.B.Livshits, professor N.Nagataki. In recent decades humanitarian educational and scientific cooperation is carried out with Nagasaki University Corporation, Fukushima Medical University (professor S.Yamashita), Wurzburg Medical University (professor H.Rainers), Thyroid Center of professor I.Branovan, Tokyo Medical School (professor K.Shimidzu), Metabolic Center of Jagiellonian University.

For the whole period of its existence the department has trained the following professionals: professor L.I. Danilova (1998), T.V.Mokhort (2006) and 25 Candidates of Medical Sciences, more than 5,5 thousands of doctors (более 230 циклов), about 60 residents and PhD students have been trained at the department. 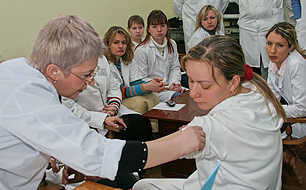