Department of Anesthesiology and Resuscitation 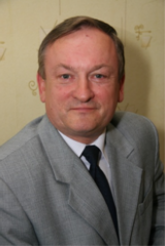 
Staff of the Department:

On the 1st of February, 1968, the Department of Anesthesiology and Resuscitation started its independent functioning, Kliavzunik I.Z., Candidate of Medical Sciences, became head of the department. That year Zubovich V.K., Borisevich E.B., Plavinski A.A., Zhiznevski Y.A., who successfully defended their dissertations on actual issues of anesthesiology and intensive care, started their work at the department. 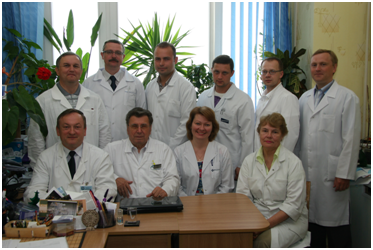 In 1970 Kliavzunik I.Z. was conferred the Degree of Doctor of Medical Sciences, in December of the same year - academic title of professor. From 1971 due to the staff increase the department had been taking the assistants Kaloshits N.P. and Kozintseva K.E.

In 1974 Plavinski A.A. was in charge of the course on anesthesiology and resuscitation at Minsk State Medical University,

In 1979 Minsk Emergency Clinical Hospital started its functioning and as a result it became the clinical base of the Department of Anesthesiology and Resuscitation. At this time departments of anesthesiology, resuscitation and intensive care, toxicology and intensive care at acute nephatony were reorganized and continued their development. Staff of the Department got a unique clinical base and became heads of the departments mentioned above. 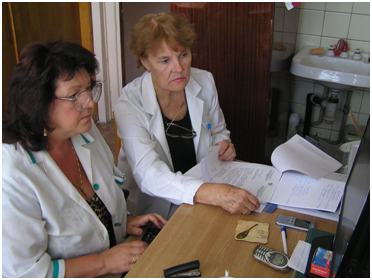 From 1980 to 1982 Borisevich E.B. and Zhiznevski Y.A. became Associate Professors, Zanevski V.P., Uelski L.A. and Kanus I.I. continued thier career as assistants. In 1990 an assistant Kanus I.I. defended his Doctoral Thesis and became head of the Department. Kliavzunik I.Z. continued to work as a professor until 1999. In 1990 Voronko E.A., Zanevski V.P. and Zhiznevski Y.A. left the Department, Buyanova A.N. got an academic title of Associate Professor. 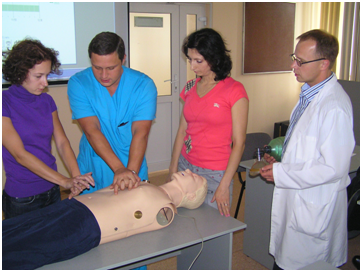 In 2004 professor Ilyukevich G.V. became head of the Department. Scientific researches on the study of pathogenesis and intensive therapy of purulent infection, held at the Department, made under supervision of professors Khulup G.Y. and Kanus I.I., were finished in 2004, when Ilyukevich G.V. defended thesis on the topic "Pathogenetic justification and efficiency of complex intensive therapy of widespread peritonitis" and got an academic title of Doctor of Medical Sciences.

Annually more than 300 physicians undergo training on the most actual issues of anesthesiology, toxicology and intensive therapy of critical conditions. The unified programme for anesthesiology and resuscitation specialists together with the course program have been created:

At present 5 postgraduate students, 35 clinical residents and 8 degree-seekers undergo the training at the Department.

The Department has quite a huge scientific and teaching potential to undergo Doctoral courses, postgraduate training and clinical residency by physicians of the Republic of Belarus, CIS and non-CIS countries. 9 foreign residents from Lebanon, the Ukraine, Georgia study at clinical residency.

Main direction of scientific work of the Department are the following ones: 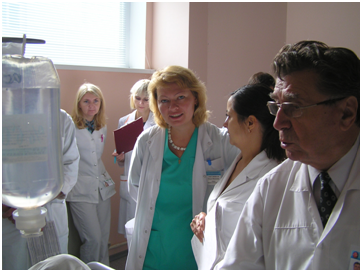 At present staff of the Department works on 4 Doctoral and 5 Candidate's thesis.

The department has organized 6 congresses in anesthesiology and resuscitation in the Republic of Belarus. 8 monographs, 14 collections of research papers from congresses, conferences and plena were published, 16 patents were given.

In the framework of the State program "Belmedtehnika" staff of the department participates in a number of scientific projects. At present there is a serial production of anesthesia artificial respirating units, gas visual display and hemodynamic units, hospital beds. Works on the creation of units for inhalational anesthesia and artificial respirating units, monitoring devices. Scientific papers of the Department were recognized in the Republic of Belarus and abroad.

In the framework of international cooperation the Department started to organize and held mutual scientific seminars and sections.

The Department does a huge deal of treatment and consultation work at divisions of clinical bases, and also at healthcare establishments of Belarus. Annually there are 200 participations.

At present the Department is well-equipped having a highly qualified teaching staff and information, reference and teaching aids. Work of the Department awarded with the Diploma of the Ministry of Health, Health care Committee, BelMAPO, national awards.